Spring cleaning has begun in the green areas surrounding Hevelianum, and it involves the assembly of nesting boxes and shelters for the winged inhabitants of Góra Gradowa – the birds and bats.

City parks, like the one which is part of Hevelianum and surrounds the vast Góra Gradowa area, are important places for birds. The parks are not only important during the nesting season, but also in the autumn and winter, as it is here where they gather to overwinter. Parks also offer shelter to bats, which occupy abandoned tree hollows, split branches and holes in tree bark. These mammals also often use nesting boxes, which serve as valuable shelters, especially during their spring and autumn migrations.

The project involving the hanging of nesting boxes and shelters in the Hevelianum park began last year. That is when an expert ornithological and chiropterological analysis was conducted to help us determine what species inhabit the area. A several-hour-long observation conducted in the park in November 2020 identified the presence of the great tit, Eurasian blue tit, Eurasian nuthatch, common starling, common chaffinch, common wood pigeon and the European jackdaw.

In addition the Hevelianum area comprises two protected locations where bats overwinter – the “Chestnut Magazine”, which is home to three species: the Natterer’s bat, Daubenton’s bat and the greater mouse-eared bat, as well as the “Bat Fort” with an area of 1.2 ha (Napoleon’s Reduit area). It is the fort’s largest and Gdańsk’s third largest overwintering area, with four confirmed bat species calling it home, all of them under strict protection. These include the greater mouse-eared bat, Natterer’s bat, Daubenton’s bat and the brown long-eared bat.

In accordance with expert opinions, nesting boxes featuring professional ornithological solutions were ordered – they are made from certified pine wood coated with ecological flaxseed oil varnish and covered with a sheet metal roof, which protects the wooden construction from water and erosion.

“Alternative nesting places in the form of nesting boxes serve a very important function in parks. They offer shelter for birds, as well as contributing to the preservation of protected species. By hanging nesting boxes, we contribute to increasing their nesting potential and have a positive ecological impact on the area”, says Michał Dworak, author of the ornithology expert opinion ordered by Hevelianum.

Go back to news 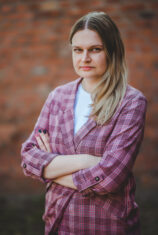 SPECIALIST FOR COMMUNICATIONS AND MEDIA